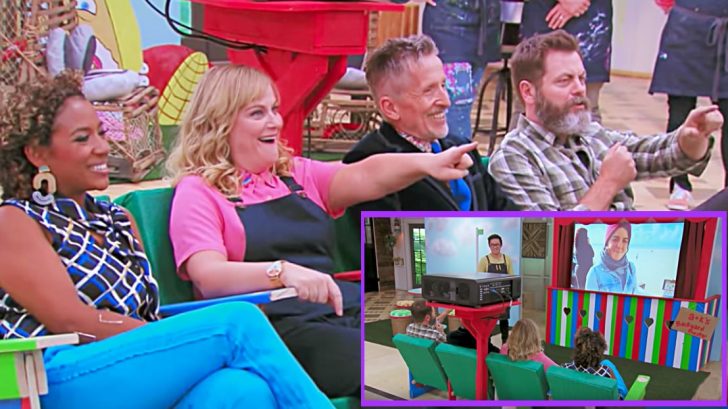 If you haven’t been watching NBC’s new crafting show, Making It, you’re seriously missing out. I can’t get enough of this adorable show!

I also highly suggest checking out some of Nick & Amy’s hilarious pun battles. These things keep me entertained for hours. You can see two of them here & here, and one of them below.

This week, the elimination challenge was focused on backyards. What could the makers create that expressed their idea of some backyard fun?

For 28-year-old contestant Khiem Nguyen, that was an outdoor theater, complete with a home movie of his fiancee, Amanda.

The backyard theater left all of the judges impressed, but the romantic aspect of it almost left Amy in tears, in true Leslie Knope fashion. Unsurprisingly, Khiem ended up winning the challenge.

The makers were also challenged with making animated food pieces earlier in the episode. One of the most notable was Billy Kheel‘s foosball table, made of meat, cheese, wine, and breadsticks.

Nick saw the unfinished product contained meat and already declared it the winner, making Amy & Billy laugh in the process.

In the end, one maker had to be sent home. This time, it was Nicole Sweeney from San Francisco.

I’m definitely going to miss Nicole’s artistry, but I can’t wait to see who ends up winning the show!