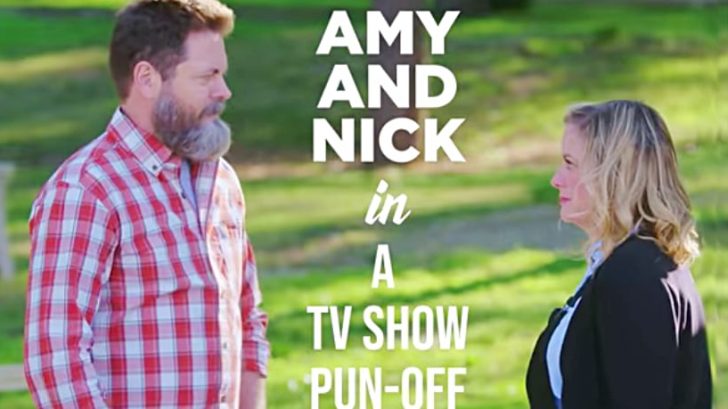 As the premiere of Making It approaches, Amy Poehler & Nick Offerman continue to promote the upcoming show in the most creative ways.

If you haven’t heard, Amy Poehler and Nick Offerman are working together again. It’s not for a Parks & Recreation reunion yet, but it’s something that got me just as excited.

They’re co-hosting a show on NBC called Making It, and it’s a competition show all about crafting! There’s challenges with sewing, decoupage, woodworking and more.

No one in this competition show gets eliminated, so you get to see a ton of crafters go head to head every week. However, there is a winner, and that winner gets $100,000.

That chunk of change and crafting? Can I still sign up?

To promote the show, Amy and Nick sat down and challenged each other to a battle of puns. There’s a catch though– all of their puns had to do with crafting.

This time around, they hone it in even more: crafting and TV shows.

Watch the video below and choose your champion. Who do you think won the pun-off?

Last time, Nick finished it off. This time around, Nick declares Amy the winner. Personally, I liked them both equally. Game of Rhinestones? Glue’s The Boss? Come on. Hilarious.

Just like crochet, you could say this show already has me hooked.