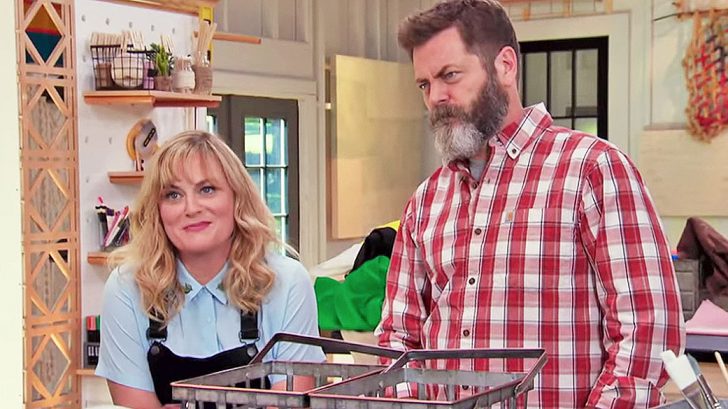 Remember Amy Poehler and Nick Offerman from Parks & Recreation? Leslie Knope and Ron Swanson aren’t making a return to television any time soon, but Amy and Nick are teaming up for a new TV project, and it isn’t what you’d expect.

“The idea came from wanting to totally celebrate the every day maker,” Amy said. “And then it was like really how do I get to hang out with Nick all the time?”

Crafters from around the U.S. are given various challenges– woodworking, sewing, decoupage and more– and with each win, they get a patch.

No one in this competition show gets eliminated, but there is a winner, and that winner gets $100,000.

As for their own crafting prowess, Amy revealed on Ellen that she doesn’t have much. “You always need someone to hold things,” she said. “When someone’s like ‘Hold on. I’m almost done. Hold this.’ I’m really good at that.”

Nick, on the other hand, is quite the woodworker. He’s made oars out of the wood from Parks set pieces, a cutting board in the shape of fictional Parks town Pawnee, and more. He can even identify types of wood by scent alone.

Amy raved about Nick’s prowess on Ellen. “Nick is an incredible craftsman. That’s why doing this craft show together was so awesome, because he’s so talented, and he’s made beautiful things for me over the years,” she said.

Their goal is to get people to start making things for themselves.

“It is actually a very Ron Swanson thing, making a show to get people to stop watching TV,” Nick said with a giggle. “We’re gonna bring it down from within.”

With both of their comedy skills, their love for crafts and crafters, and the competition itself, there’s no doubt that this show is going to be a summer must-watch. Check out their behind-the-scenes video below if you want to get a feel for what the show’s all about.