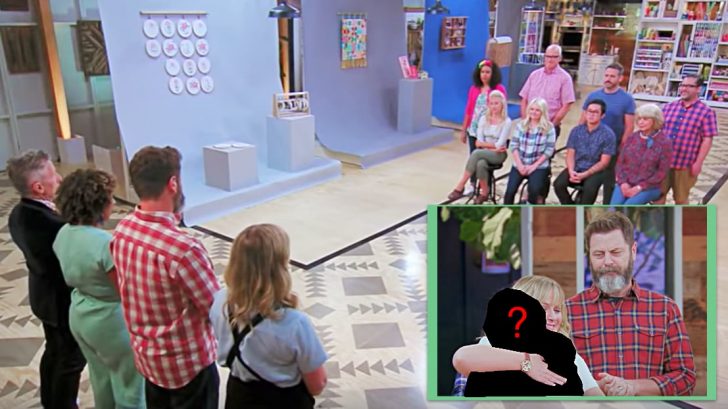 If you’ve been living under a rock, you haven’t heard that Nick Offerman & Amy Poehler have teamed up to create a reality competition show entirely centered on crafting.

It’s called Making It, and it premiered on July 31st. As was expected, there was plenty of comedy sprinkled throughout, but the show was really focused on crafting, and it was awesome.

Be warned, this post does include spoilers and video footage, so if you’re still planning on catching up on Hulu, you may not want to read on.

So, here’s how awesome the episode was.

In this first episode you meet the 8 “makers” from all over the U.S.: Joanna, Amber, Billy, Robert, Khiem, Jemma, Jeffery, and Nicole. Each have their own specialty and a variety of crafty accomplishments.

The makers are given their first challenge, which focused on modernizing the idea of a family heirloom. Each maker’s take on the challenge was completely unique, some heart warming, and some heart-wrenching.

Jemma Olson, a hodgepodge crafter from Rockwall, Texas, made her owl heirloom out of plywood, stacked pennies, a pocket watch, and more.

She credits her idea to her parents, 8 children, and 15 grandchildren. Her children and grandkids get together 2-3 times a year to craft, which she says has the power to “make real, live memories.”

Jeffery Rudell, from New York, New York, focused his energy into creating a quilt for the challenge. During the challenge, Amy asked him what heirlooms mean to him and what this challenge meant for him.

He goes on to explain that for him, there is no heirloom, because he and his family parted ways after they learned he was gay.

Even with that experience, Jeffery used crafting as a form of therapy, which he called “much cheaper” and “very satisfying.”

This is definitely the heaviest moment in the episode, but Jefferey channels this into something absolutely gorgeous.

Amy & Nick have done a wide variety of things to promote this, including multiple crafting pun-offs, one based on TV shows, and one on celebrities, which you can watch below.

They also have multiple wood working segments with Jimmy Diresta, and a ton of other awesome crafting content. None of these matched up to what the show ended up being: a hilarious, bright breath of fresh air.

Watch the video below to recap who came out on top and who was the first to say goodbye. Was it who you expected, or were you surprised?

The next episode premieres August 7 at 10PM PST on NBC.

I know I’ll be watching! Will you?