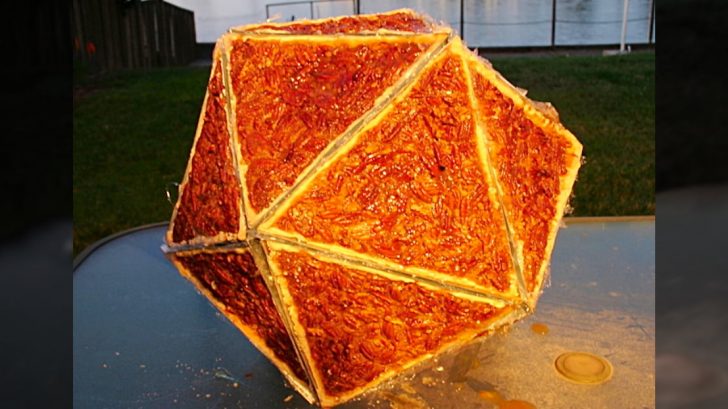 I never thought anyone could love pecan pie more than I do. I make it every chance I get, no matter the season, and have tried so many recipes my head would explode if I wrote about them all.

The point is I thought I had seen everything when it came to pecan pies. I was proven wrong when I stumbled upon this monstrosity of a recipe: the 20-sided modular icosahedron pecan pie.

It’s a mouthful to say, but it’s even more of a mouthful to eat. 20 triangular pecan pies come together to form the final product. It’s pie on pie on pie, or pie-ception, if you will.

The “icosahedron” is the name of the shape the pie forms, a 3-dimensional module that will remind you a LOT of a 20-sided die if you’ve ever played Dungeons & Dragons.

If you want to venture on making one of these babies, turkey tek from Instructables has got you covered. It takes a lot of math, a lot of patience, and some very good magnets…

There are 7 steps involved in making this crazy pie. Laying out and cutting the pieces, folding and riveting the sides, attaching the magnets, baking a test pie, followed by 19 more pies, re-epoxying the magnets, and finally assembling the pie to enjoy.

To get the exact math necessary for this very complicated pie, click here to visit turkey tek’s post.

The aesthetic of the pie is huge in making this pie a success, but you also want it to taste amazing. A 20-sided modular icosahedron pie is only as good as it tastes, after all.

Do neither of those fit what you’re looking for? Not a problem. Check out the YouTube video by Food Wishes down below! Regardless of which recipe you choose, I hope you have fun making this crazy pie.