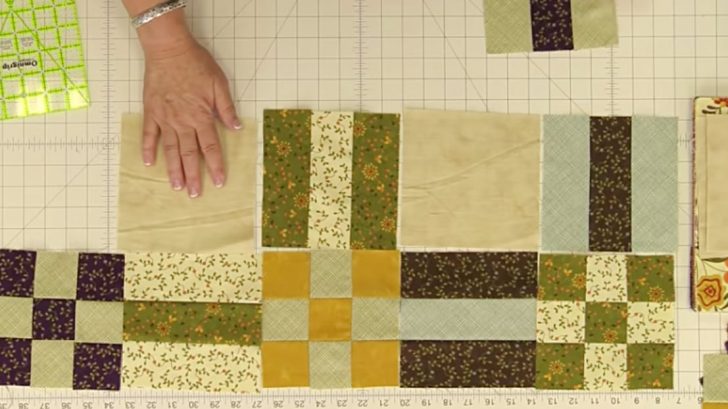 Jenny Doan from Missouri Star Quilt Company is back at it again with another quilting tutorial, this time for a Nine Patch & Fence Rail.

This easy to make quilt is just gorgeous, and it’s done incredibly quickly. There’s not much to do except grab your supplies and starting to sew, so here’s what you’ll need:

Making this quilt is super simple because it consists of two blocks that every quilter knows: a nine patch, and a fence rail. These blocks are both incredibly easy to make.

The fence rail consists of three strips: one bolder color in the center, and two matching strips on either side of that middle strip. Sew those together, cut into a square, and that block is done!

As for your nine patch, you’ll be using two colors of equal-sized squares, alternating them in three rows. Once you sew together these little squares, that block is done as well.

As for the rest of the quilt, you’ll be using a solid block to ground the bordering blocks you previously sewed. There are also multiple borders, one of which is made of the nine patch squares.

Sew these together like Jenny shows, and your quilt top is done! Just add some batting, a backing fabric, and sew them together. Now you have a full quilt!

Watch Jenny stitch it up in the video below, and you’ll have your quilt done in no time.