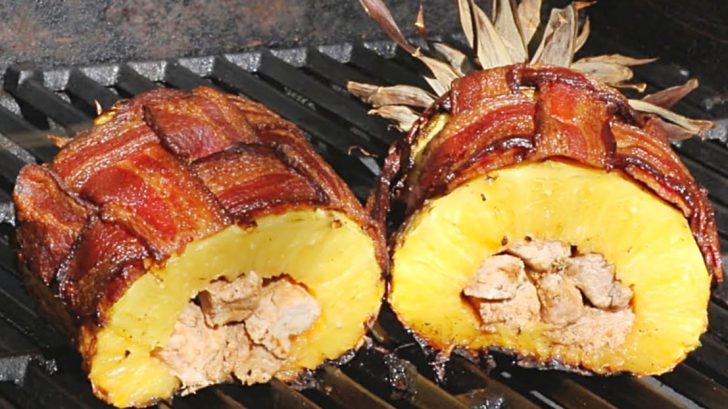 It’s no secret that pineapple and pork are a match made in heaven. Specifically barbecue pork is known as a perfect counterpart to the yellow, spiky fruit.

It’s called a swineapple, and not only does it combine all of the delicious flavors of pork and pineapple, but it’s wrapped in delicious, salty bacon, and it looks so cool!

The best part is it’s super simple to make. So with that in mind, let’s get started!

Preheat your oven to 275 degrees F.

First, marinate strips of pork in barbecue sauce, pineapple juice, and paprika. In the meantime, cut the top off of and core your pineapple, then remove its spikes from the outside of the bottom half.

Stuff the pineapple with your marinated pork. It’ll bake inside the pineapple, giving it a ton of juice flavor.

Weave a ton of bacon strips into a quilted pattern, then wrap it around your pineapple. skewer it in place, then bake for 3-4 hours until the bacon is crispy. Baste every so often with the excess juices.

For exact measurements used in this recipe, click here and open the description box at the bottom of this video.

Otherwise, adjust as needed and enjoy!