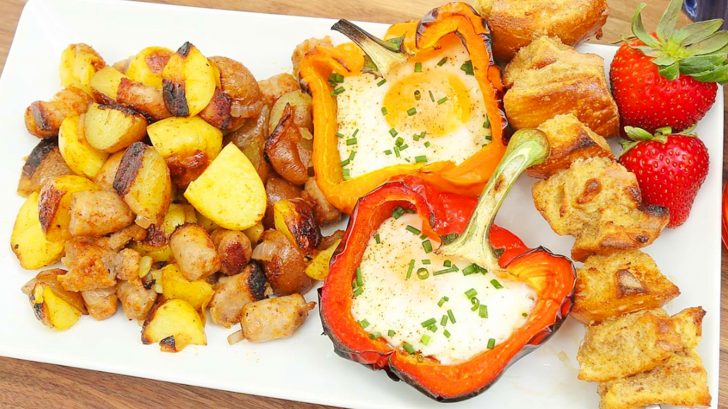 Summer is the season to be outside. No matter what time of day it is, there’s plenty to see and plenty to do. That’s why for meals, so many people go outside and turn on their grill.

Usually, people tend to grill for lunch or dinner, but they’re truly missing out by not grilling the most important meal of the day: breakfast.

As per usual, The Domestic Geek has our backs. She’s given us 3 amazing grilling recipes that are perfect for breakfast. Wanna make them yourself? Let’s get started.

In a large bowl, combine all ingredients and toss until everything is evenly coated. Divide your potato mixture onto 4 equally-sized sheets of heavy duty foil, then fold the foil to create small packets.

Place packets on the grill over medium heat for 15-20 minutes or until potatoes and sausage are fully cooked. Flip them every 5 minutes to prevent them from burning. Now you’re ready to serve!

Coat the skins of your peppers with olive oil. Place each pepper half on the grill, skin side down, and then crack an egg into each, seasoning with salt and pepper.

Grill with the lid closed until the egg is cooked to your liking, making sure the whites are set. That’s it. It’s ready to serve!

Place bread cubes in a large zipper bag. Whisk eggs, milk and cinnamon together in a medium bowl. Pour the egg mixture over the bread cubes, shaking until all of the bread is evenly coated.

Divide the bread cubes on 4 to 6 skewers, then grill over medium heat for 2 minutes per side, making sure they become golden and toasted. Serve with lots of maple syrup. Yum!

Will you be making a grilled breakfast this summer season?