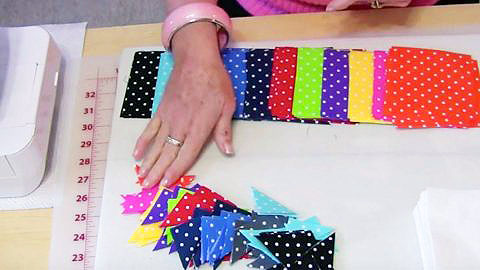 I couldn’t wait to make this bow tie quilt! I opted for fabrics that had tiny intricate prints on them to give it a more vintage look. It turned out so amazing and I think it’s one of my favorite things I own. I also opted for the smaller quilt so I could use it for a lap quilt when I watch TV. It is just precious!

This block (also called Necktie or Hourglass) dates back to the days of early Americans settling in the West. Although some blocks were created and named to honor important events or people in history, many quilt blocks were also named for everyday parts of pioneer life.

As the children’s book The Quilt-Block History of Pioneer Days says, “They were a way for pioneer women to tell the story of the settling of the country in a very special art form.”

Later, the Bow Tie block was also part of the Underground Railroad.  Although it’s controversial among historians, there are many stories of quilts being used as secret codes for the stops.

Specifically, the Bow Tie block was “a symbol indicating it was necessary to travel in disguise or to change from the clothing of a slave to those of a person of higher status.”

Bowtie quilts have a ton of history and are still just as darling and culturally significant today as they were in the 1800s. The best part? They’re super easy to make!

Watch as Laura Coia shows you in her step by step tutorial how to make this beautiful quilt.