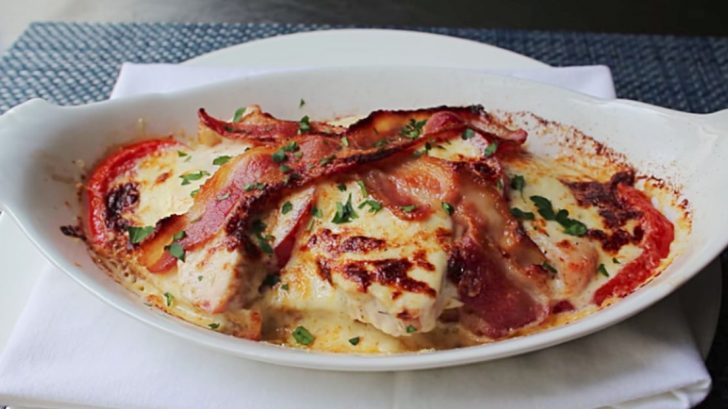 In Louisville, Kentucky, there’s a well-known hotel that has changed the way the south sees food. The Brown Hotel created a knife and fork sandwich called “The Hot Brown.”

This hot turkey sandwich is drenched in a cheesy sauce and topped with fresh tomatoes and crispy bacon. It was apparently invented to soak up the bourbon they served.

It’s not very well-known outside of the south, but it’s delicious no matter where you’re from. That’s why I decided to tell y’all how to make your own!

With the help of Chef John from Food Wishes, you can make this sandwich no matter where in the world you live, and you’re going to be obsessed with it as soon as you take a bite.

Here’s what you’ll need to get started:

Before anything, you’ll want to prepare and slice your turkey. If you’re doing this from scratch, watch John’s tips in his video below.

Now, on to arguably the most delicious part: the cheese sauce. Start by making a roux. Melt your butter in a sauce pan, then add your flour. Toast the flour until is smells like cooked pie crust.

Add your cold heavy cream to the roux, then mix thoroughly until the cream thickens a bit. Add your Pecorino cheese (you can also use Parmesan or a sharp cheddar if you prefer). Let it melt.

Add in your spices: the salt, pepper, cayenne and/or paprika, and nutmeg. Toast your bread and lay it out in a deep casserole dish. Then, lay out your turkey and tomatoes.

Finally, pour over a decent amount of your cheese sauce and top with bacon and more cheese. Broil until the cheese is browned and the bacon is crispy, then add a bit of parsley. Thats it, you’re done!

Watch Chef John make the hot brown in the video below, then you can try it yourself. You can thank me later.