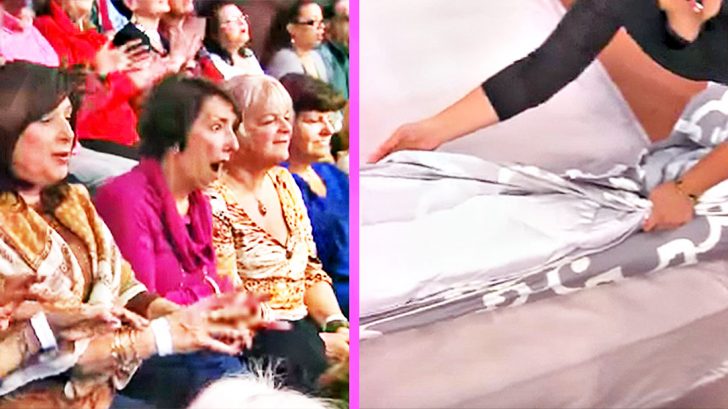 Putting on a duvet cover is by far the most obnoxious part about making a bed. It takes forever, is pretty difficult to get right by yourself, and makes you break a sweat.

I couldn’t believe that I had never heard of this trick before. All these years and I was taking forever putting a duvet cover. My jaw dropped when I saw how easy it could be!

Meredith Vieira’s audience had the same reaction as me when an editor from Real Simple demonstrated the trick on The Meredith Vieira Show.

This hack is super easy. First, flip your duvet cover inside out and lay it down on your mattress. You want the opening to be at the foot of the bed.

Then, lay the duvet on top of that. If your duvet cover doesn’t have strings on the corners to keep the duvet in place, use some safety pins to keep the two connected.

Once you do this to both corners and get the middle of the comforter stuffed as well, you can zip your cover on to your duvet.

Then comes the magical part. Start to unroll your burrito back to the head of the mattress, and your duvet cover will be perfectly placed!

I have needed this hack in my life for years and I’m so excited to share it with you guys. Once you try it, you’ll wonder how you ever lived without it!