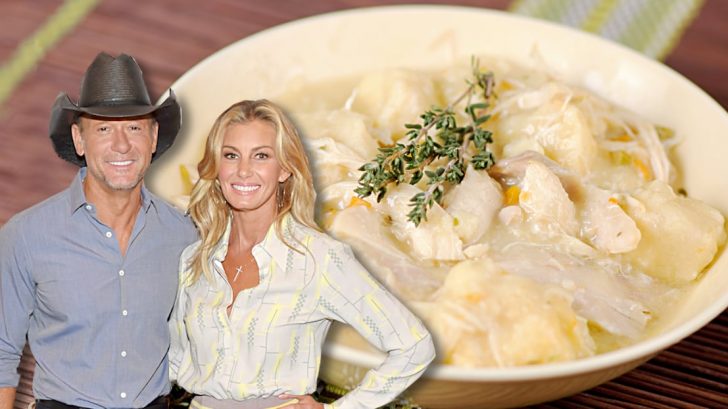 Before Tim McGraw was the country powerhouse he is today, he was in a small kitchen in Nashville, on the phone with his grandmother learning how to make chicken & dumplings.

McGraw says he found out he could feed a ton of people for around $5 with this recipe, so he made it all the time, including for his future wife, Faith Hill.

In a segment for the Oprah Winfrey Show, Tim & Faith cook these chicken & dumplings for the audience at home to try.

During the segment, Tim cracks a ton of jokes, insinuating that these dumplings let McGraw & Hill move their relationship to the next level.

“It worked for me, guys, so you might want to try this at home,” he says with a smirk.

If it worked that well, maybe these dumplings are worth giving a shot.

First, cook a whole chicken in some water with a pinch of salt. Once the chicken’s done, you “pull all of the good stuff off the chicken and throw the bad stuff away,” according to Tim.

You add a cup of chicken broth to the mixture then start on the dumplings. 3tbsp. of butter shortening and 2 cups of flour into a bowl, then cut it together.

That’s it! Give their tips and tricks for dumplings a try, then give it a shot and see if it works for you!