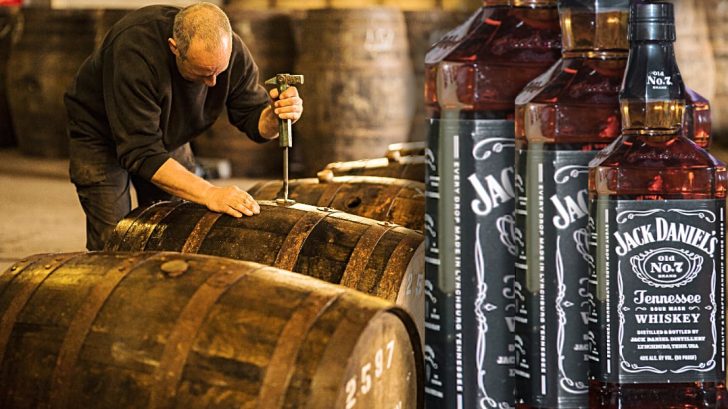 When you think Tennessee whiskey, you think Jack Daniel’s. It’s the oldest distillery in America and their whiskey is craved by people all over the world.

So much so, in fact, that 140 countries order Jack Daniel’s to be sold to consumers. After 150 years, Jack Daniel’s still has icon status.

So iconic, in fact, that fellow icon Frank Sinatra was buried with a bottle of it. You probably wouldn’t believe it was made in a town with one stoplight where it’s illegal to sell it.

Lynchburg, Tennessee is where it all started. In the 1850’s, Nearis Green, a slave to preacher and distiller Dan Call, taught Jasper Newton “Jack” Daniel how to make whiskey and run a still.

Lynchburg is where it happens today as well. Each drop of Jack Daniel’s is made from spring water in Lynchburg, along with corn, malted barley, and rye.

Jack has a low percentage of rye, and the 1 million pounds of grains per day that are unloaded and elevated into their silos are recycled after being spent for the fermentation process.

That’s what makes Jack Daniel’s so different. Along with that is their mash cooker process– heating the spent grains with ground corn to the spring water, then cooling them back down.

Now it’s time for sending them to the fermenter. Rye is added here with barley malt, along with Jack Daniel’s own strain of yeast that they’ve used since prohibition.

This mixture will sit in the fermentor for 4-6 days. A liquid with about 12% alcohol content is formed from this: the yeast splits molecules of the grain into carbon dioxide and ethanol, or alcohol.

Then comes distillation, where they vaporize alcohol and turn it back into a liquid, creating a full 140 proof. You collect that off into the condenser.

This condensed whiskey is passed through charcoal made from burning sugar maple wood. Once poured through, it’ll filter oils from the grains out of the whiskey.

After that, they’re placed in their barrels– made from white oak in house and charred –and the 56 gallons per barrel sit in those barrels to age for 4-7 years before being bottled.

This process hasn’t been changed for over 150 years, and that’s what makes Jack Daniel’s the Tennessee whiskey for casual drinkers and connoisseurs alike.

Watch the BRANDMADE.TV video below to learn more about this highly detailed process. The next time you have a sip of Jack, I’m sure you’ll appreciate it a lot more. I know I did!