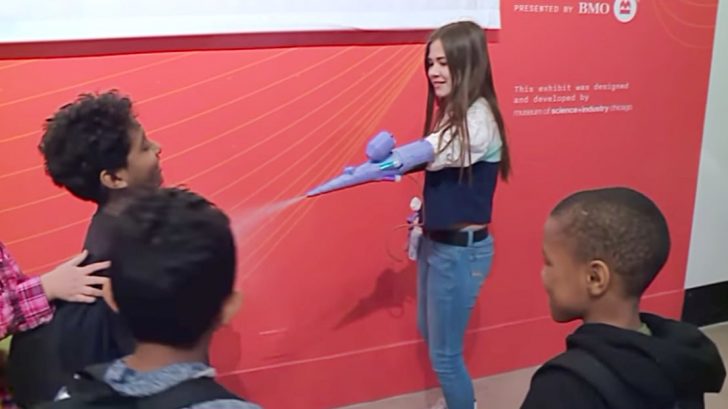 People all over the world have things that make them different than those around them. Whether it’s the color of your eyes, the texture of your hair, or something else entirely, we’re all unique.

For 13-year-old Jordan Reeves, one of her differences is her arm. She was born with one full arm, but her other arm stops at the elbow. Because of this, Jordan was exposed to prosthetics at a young age.

Instead of yet another plain prosthetic arm, Jordan came up with an alternative: a unicorn horn that shoots glitter out of its tip. Not only did she dream it up, she worked with people to make it a reality.

Then, working with her prosthetist and technical designers at Autodesk, she designed and built the glitter cannon. It took over a year to develop the horn cannon, aptly called “Project Unicorn.”

The light purple horn-shaped sparkle cannon can shoot glitter up to 6 feet in the air. Needless to say, this prosthetic is probably the coolest thing a 13-year-old could ever have.

But why did she choose to make a unicorn horn?

The 13-year-old’s creation definitely got people talking. In fact, Reeves received a ton of awards for her ingenuity and for founding a nonprofit, Born Just Right.

In addition, Reeves was invited to display her prosthetic at the Chicago Museum of Science and Industry‘s Wired to Wear exhibit.

“We wanted people like Jordan in the exhibit because she is very creative and really pushing forward the idea of how we can wear technology in the future,” MSI Head Curator Kathleen McCarthy told WGN9.

If you want to check out the unicorn horn glitter cannon yourself, it will be on display until May of 2020. Jordan hopes to move forward with her nonprofit and continue to inspire people with her ingenuity.

For a girl like this, I think it’ll be easy!