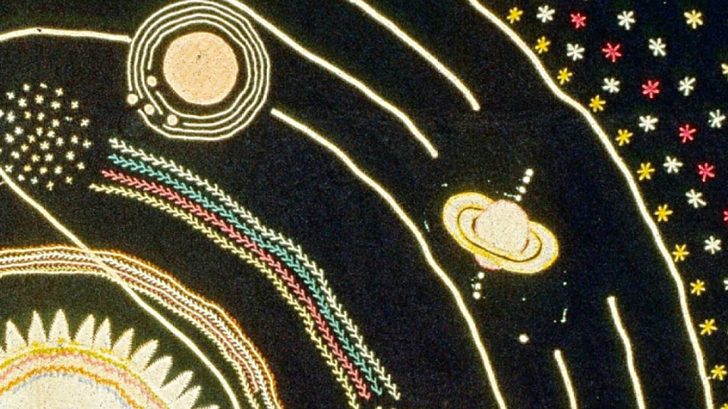 For as long as teaching has been a profession, teachers have been going above and beyond to not only teach their students, but impact their lives. Teachers are some of the first people that inspire us.

Some of that inspiration comes from how they teach. Take astronomer Ellen Harding Baker in 1876. She used her quilting skills to teach her students about the solar system!

This is already above and beyond as it is, but she was rumored to have spent 7 long years embroidering the solar system into the finished product, which became a visual aid for lectures.

The massive 89″ x 106″ quilt was finally completed in 1876. It’s made of a black woolen fabric and covered in appliqué made from wool, wool braid, and wool and silk embroidery.

What’s so cool about this quilt is how accurate it is in comparison to astronomy books of the time. It has the sun in the center, surrounded by the 8 planets, an asteroid belt, stars, and even moons for each planet!

In addition to the Earth’s moon, the Galilean moons of Jupiter and the moons of Saturn, Neptune, and Uranus are embroidered on to the finished quilt. You can even see Saturn’s rings!

There’s also a large comet in the upper left hand corner that many believe to be representative of Halley’s comet. The last time the comet was seen during the time period Baker was alive was 1835.

Baker’s stunning solar system quilt is at The Smithsonian Museum of American History. It’s not currently available for public viewing, but regardless, it’s a stunner.

Hopefully it will be available to view in the near future!