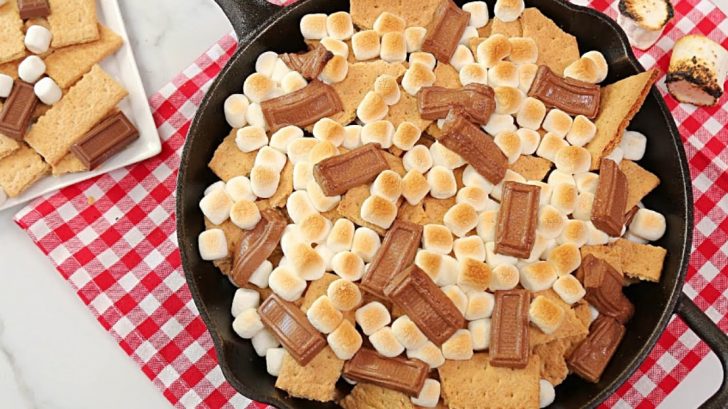 When you think of campfires, bonfires, or family gatherings during the summer, you probably think of s’mores. The chocolate, the marshmallows, the graham crackers… what’s not to love?

Instead of making the classic sandwiches, there are a ton of recipes that take s’mores to a whole new level. Case in point: s’mores skillet nachos.

Dessert nachos are nothing new. There are recipes for all sorts of different takes on dessert nachos, but this is by far the best. How could there possibly be anything better than the s’mores version?

The Domestic Geek on YouTube is back at it again with 3 s’mores-inspired desserts you’re going to be downright addicted to. Today, we’re going to go over her version of s’mores nachos.

If you want to see her other two recipes, s’mores bars and s’mores milkshakes, take a look at the video down below. They’re all delicious!

Now, on to making the s’mores skillet nachos. Here’s what you’ll need:

Start by preheating your oven to 350 degrees F. In a well-seasoned skillet, layer your graham crackers, chocolate, and marshmallows. Bake until the marshmallows are slightly golden, 10 to 12 minutes.

Now, broil for 1 minute to make sure the marshmallows are extra toasty and the chocolate is melted. Using a double boiler, melt your chocolate chips and drizzle chocolate sauce on top.

The s’mores nachos are all ready to eat! Enjoy, and be prepared to never want to go back to traditional s’mores again.

Check out The Domestic Geek‘s video below for more on this. You’re gonna love these, trust me.