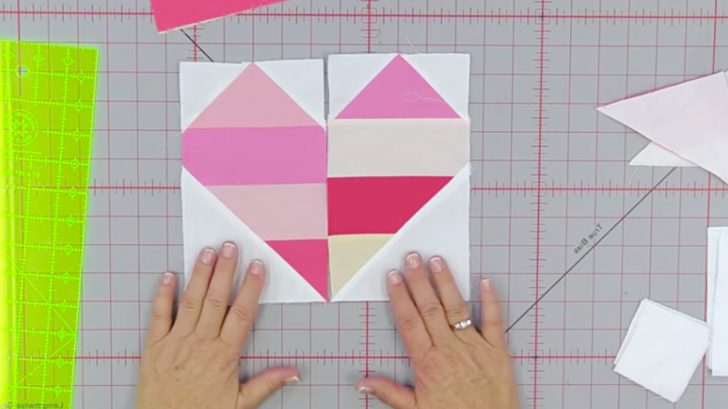 Quilting A Whole Lot Of Love

Valentine’s Day is on its way, and if you’re a quilter, you’re probably thinking of the perfect project to make for the holiday. I’m happy to tell you that you probably just found it.

It’s called the “Tender Hearts” quilt, and Jenny Doan from Missouri Star Quilt Company sews it up in one of her video tutorials. It’s super easy to do, so let’s get started!

Creating the heart block is a lot simpler than it seems. I separate it into 4 sections to create the heart. It’s made out of strips and squares, so by splitting it into sections, it’s done a lot easier.

Cut 2 different squares in half, and separate those halves. Sew one half of one square to the other half of the other. Cut them into half square triangles.

With a background square, cut that into another half square triangle. Sew the background triangles to the colored strip triangles. This will form the bottom point of the heart.

As for the top, you’ll use the remaining halves from the colored squares. The top of the heart will be made from a separate strip, made into a trapezoid with background fabric surrounding it.

Sew these parts all together, and the block is all done!

Watch Jenny create this quilt in the video below for a visual. You’ll love this quilt, and it’ll definitely have a place in your heart no matter the time of year.