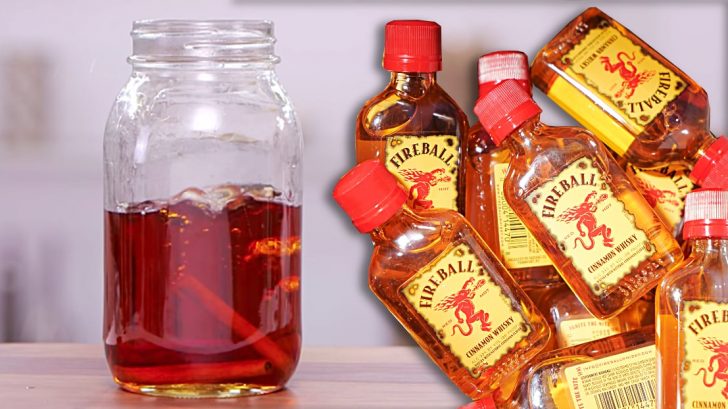 Fireball Cinnamon Whisky. I’m obsessed with it, and I always get it when I’m out, whether in a spicy drink or alone in a shot, but one day I wondered what was actually in it.

Alcohol itself isn’t exactly good for you, but I heard that Fireball had some not ideal ingredients in it. This doesn’t necessarily mean it’s more unhealthy than another alcohol, but it does make you think.

I decided to see if I could create my own cinnamon whiskey from scratch, so not only could I have a fancier version of Fireball, but I could add “whiskey maker” to my list of positive attributes.

To make it, you won’t need a lot. In fact, you probably already have all of the ingredients:

Now to actually make it.

Grab a huge mason jar and pour your whiskey into it. Then add your simple syrup and cinnamon sticks. Shut the jar, shake it up, then leave it to infuse for 5 days before you move on to the next step.

Open up your jar and add your red chiles. Close the jar, shake it, and let it infuse for another 2 days.

After that, strain out the cinnamon and chiles, and your whiskey is ready to drink!

I plan on bottling mine up as a gift for friends this holiday season, but obviously I’m gonna save some for myself. It’s too delicious not to.