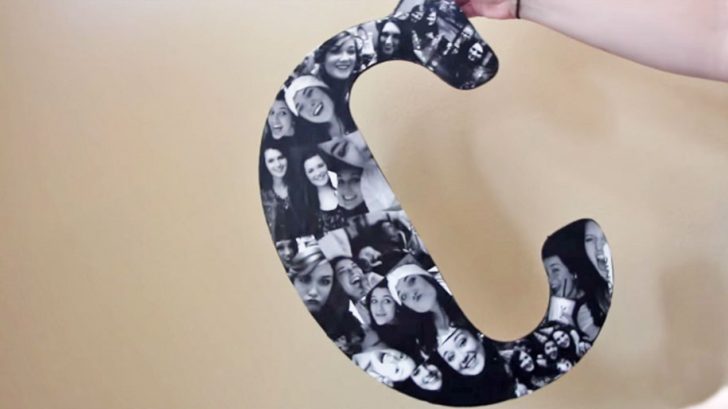 So many of my friends have painted letters in their rooms, sitting on their desks with their favorite photos. I didn’t have a painted letter in my room, but I did have a ton of photos strewn all over the place. That’s when I got an idea.

Apparently, others had the same idea that I did. I did a quick YouTube search for “photo letter,” and what I wanted was right in front of me– and there was a tutorial!

YouTuber Kyana Kay made her photo collage letter with some cheap supplies you can usually find at the dollar store: a wooden letter, some paint, mod podge, and photos printed out on copy paper.

She starts by painting the letter her desired color. Since she went with black and white photos, she painted her letter black to match the theme.

Then, she copies her photos to copy paper and cuts them out. She cuts out each photo and doesn’t worry about sizing them, she just cuts them out as if she’s going to glue them in full.

She positions her photos on her letter, planning out where she’s going to cut them to fit the curves of the wood.

Then, one by one, she cuts the photos to fit her letter, and uses her mod podge to stick those photos to the letter. She uses her excess photo pieces to fill in the gaps.

Once she finishes that and it dries, she seals the entire thing with another layer of mod podge to lock the photos in and give it a uniform look.

Once that layer dries, she’s all done and has her finished photo letter!

I love how these photo letters look, and it combines two well-known room decor items into one! I’m totally making one for myself, but I’m def going to make a ton for my friends too. When I can’t think of a gift for someone, this is my new go-to.

Are you planning on doing this too? Show us in the comments and share this post with your friends so they can, too!