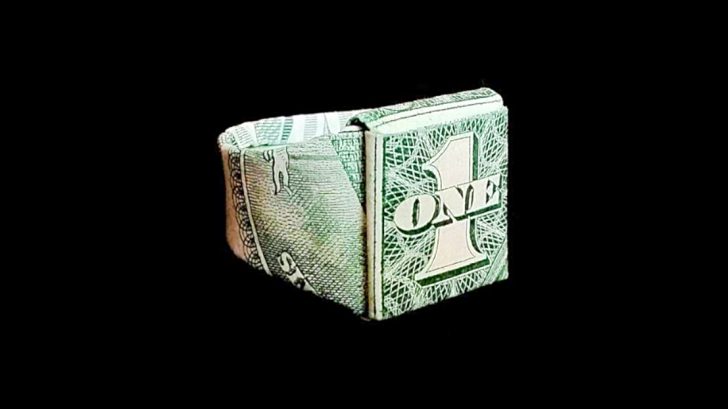 Using Money In A New Way

Have you ever wanted to make a craft but didn’t have a lot of funds to go buy the supplies? Would you believe me if I told you that you don’t even need to buy supplies?

That’s right, just pull a single dollar bill out of your wallet, and you’ve got a craft to do. What is it, you ask? An origami ring!

You literally aren’t spending any money by making this, either. No rips or tears are necessary in your dollar bill. It’s still perfectly good.

Once the dollar bill is folded, one of the “1s” acts as the “stone” in the middle, so it looks like a ring you’d actually buy, just made of paper!

The best part of this super cool ring is your ability to unfold it and use it for whatever you want. It turns from jewelry to spending cash in a flash.

So, do you wanna learn how to make this cute little ring? Let’s get started.

To make this ring, you’ll first want to start with a crisp dollar bill. Grabbing a super old and flimsy one will make it much harder on you, plus it won’t look nearly as good once it’s done.

Once you’ve grabbed your dollar bill, you can being your folds. Rob from Rob’s World on YouTube shows us how it’s done in the video below.

You’ll begin by folding one of the horizontal rims of the dollar bill over from the back to the front. Then, you’ll fold the bottom of the bill over to the top, placing the bottom under the small fold.

Now that you’ve got the basic rectangle down, it’s time to do the final bits of folding to get it into a ring! Watch Rob do that in the video below, and enjoy your new bling!