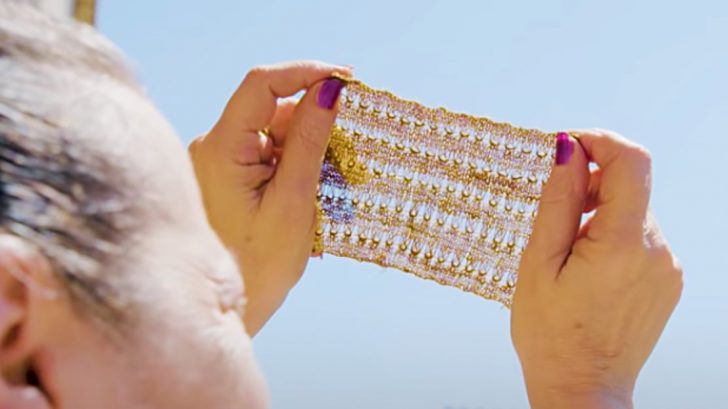 Many people in the world still weave, sew, crochet, and knit. Whether it’s satin, cotton, wool, or another fiber, working with threads and fabrics is a long-standing tradition across many cultures.

There is one ancient weaving tradition, however, that is not publicly known. In fact, the process is kept entirely secret, and there’s only one known woman left who does it.

The material is called sea silk, and it’s spun from the saliva of a species of endangered clams that live on the ocean floor of the Sardinian coast.

The seamstress is Chiara Vigo of Sant’Antioco, Italy. She’s thought to be the only person left in the world to weave sea silk, and she holds the process close to her heart, shrouding it in secrecy.

For more than 1,000 years, the techniques of collecting and weaving sea silk have been passed down in Vigo’s family. Chiara is the 28th generation to continue the practice.

She learned how to craft sea silk pieces from her grandmother, and she began using a loom at age 12. The entire process has been kept a secret in order to protect the environment.

“We shut the doors because people are not aware of the damage they can do, because they take the shells, they try to imitate me. We must avoid this,” Vigo says.

Vigo and her family have sworn an oath to never make money with sea silk, never selling it, and only weaving for pleasure or gift giving. However, Vigo has decided to share certain highlights of the tradition.

With 100 dives, she can collect 300 grams of raw material, which becomes 30 grams of usable material. That becomes 21 meters (69 feet) of twisted thread.

The shiny gold-like material is soaked in a secret solution, and Vigo uses her voice to activate it. To make a 5cm x 12cm piece (2″ x 4.7″) spun to one micron, the process takes 5 years and it weighs 1 gram.

For Chiarra, sea silk represents so much, but above all else, love.

“I chose to love through a thread that is not mine but belongs to everybody,” she explains.