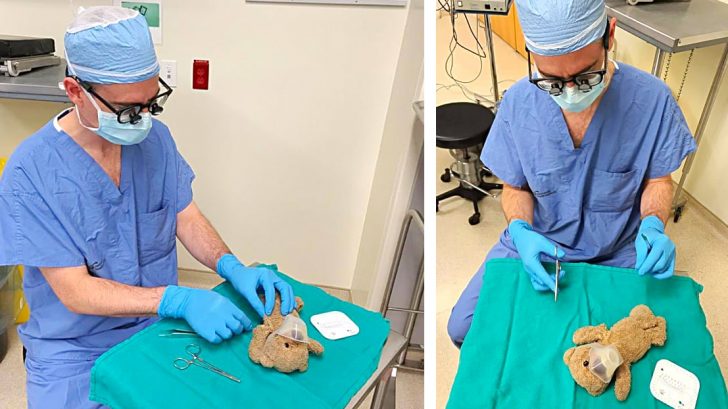 Surgeries like wisdom teeth removal or sports injury correction are pretty common in developed countries. It’s not always a scary thing, but certain surgeries are a little scarier.

One person that doesn’t see brain surgery as a huge deal is eight-year-old Jackson McKie of Canada. He lives with a chronic condition called hydrocephalus, where fluid continually builds around the brain.

In addition to this condition, Jackson was dealing with a cyst on the brain. Because of these conditions, he needed yet another surgery. Along with him, he brought his favorite teddy bear.

Jackson’s teddy bear, Little Baby, had a torn arm, so naturally, he asked his surgeon, Daniel McNeely, to fix his bear before he went in for his own operation.

McNeely couldn’t resist Jackson’s request, so he operated on the bear. The neurosurgeon performed a career first and was sure to document it on his twitter account.

Patient asks if I can also fix teddy bear just before being put off to sleep… how could I say no? pic.twitter.com/WOKFc5zr91

McNeely asked his team to prepare a table with some tools that would be perfect for the job. After he completed his surgery on Jackson, he went to work with the leftover sutures from the surgery.

Not only did McNeely follow surgeon protocol by wearing gloves, a mask, and special glasses to magnify everything, but he even “put the bear under anesthesia” while he sewed up his arm!

He used his suture-stitching skills to sew up the bear’s arm back to normal, then returned it to Jackson. Jackson was happy to wake up to his bear recovering alongside him.

Dr. McNeely’s first-ever tweet has nearly 50,000 likes and over 20,000 retweets. It seems like the rest of the world loves this gesture just as much as we do!

In case you’re wondering, Jackson is recovering well from his surgery. So is Little Baby.

If you’ve run into a torn stuffed animal and don’t have access to your nearest neurosurgeon, we’ve got you covered. Check out Sew Geek Mama‘s video below!