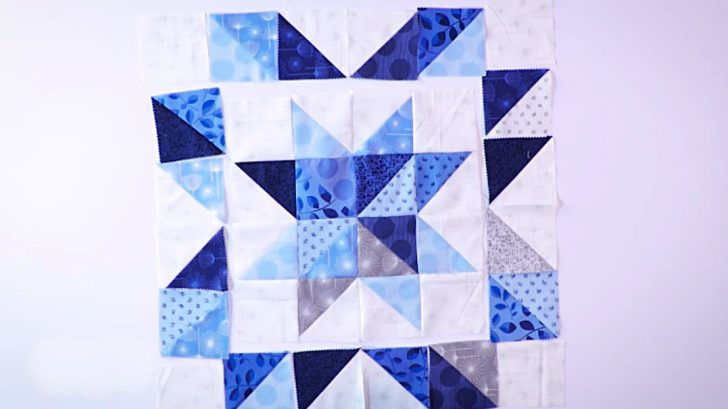 I love classic quilt blocks: half square triangles, nine patches, pinwheels, and more. My favorite classic block by far is the star. I’ve probably stitched over 100 of them at this point.

I love stitching up the stars, but sometimes, I like adding little twists to my quilting techniques. Angela Walters with bluprint’s Midnight Quilt Show has the same philosophy, and that’s how this quilt was born.

She calls it the “Modern Bursting Star,” and it looks exactly like it’s described. The star is bursting with different fabrics, giving it a ton of character. It’s like nothing you’ve ever quilted before!

Long story short, this modernized star block is a delightful twist on a classic. This finished pattern is not only adorable to look at, but it’s so easy to make, and the pattern to make it is 100% free!

By now, I’m sure you want to make this beauty yourself. Luckily, it’s SO simple. So let’s get started!

Before you do any sewing, you’ll need the pattern. You can get that for absolutely free by clicking here.

Now that you’ve got the pattern, you can begin your sewing. Believe it or not, the majority of this is simply half square triangles. Seriously, that’s really it.

As the quilt goes outward from the center, it looks like the star is bursting from the middle. A regular star is made mostly of squares and half square triangles, but this one differs a bit.

Instead of having the blocks in the center be solid, those are also half square triangles, composed of multiple fabrics. This technique will only apply to the center.

As for the outer bits, you’ll do the same technique you did for the outside of the center star: background fabric and patterned fabric forming half square triangles.

Once you arrange the quilt top, stitch it together. Add your batting, your backing, and any borders, and you’re done!

Watch Angela create this quilt in the video below, and then you can start on your own. It’s so much fun to make!