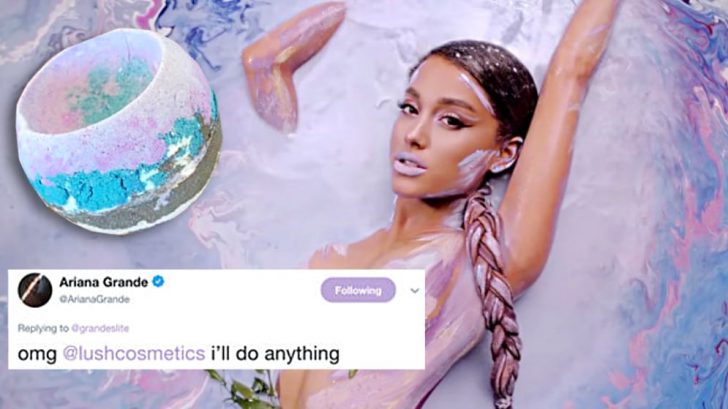 If you’ve seen Ariana Grande‘s “God is a woman” music video, you were probably just as mesmerized as I was. There were plenty of iconic moments, but nothing compared to the one with the colorful water.

Ariana is seen in lilac, lavender, blue, and pink body paint, floating in a tub of matching water. As soon as I saw it, I wanted to float in it too. It was almost too pretty.

It seems like other Ariana fans felt the same way, because one fan tweeted LUSH Cosmetics asking for a “God is a woman” bath bomb… and they responded.

omg @lushcosmetics i’ll do anything

Ariana was just as excited as her fans, begging LUSH to go through with it, and LUSH started working on it immediately.

Though LUSH is still working on the bath bomb, a representative for the brand says the finished product will include

“…hints of royal blue, mint green, and lavender, which melt in water to mimic the effect of body painter Alexa Meade’s rainbow swirls.”

LUSH is already on its second prototype for the dreamy bath bomb, and I couldn’t be any more excited. Obviously, Ariana feels the same way.

Once it’s Ariana approved, LUSH assures fans that this beauty will be hitting the shelves. Even though I don’t know what the ingredients or scent are yet, I can’t wait to feel like a goddess in my bath!

When LUSH drops this bath bomb, will you give it a shot?