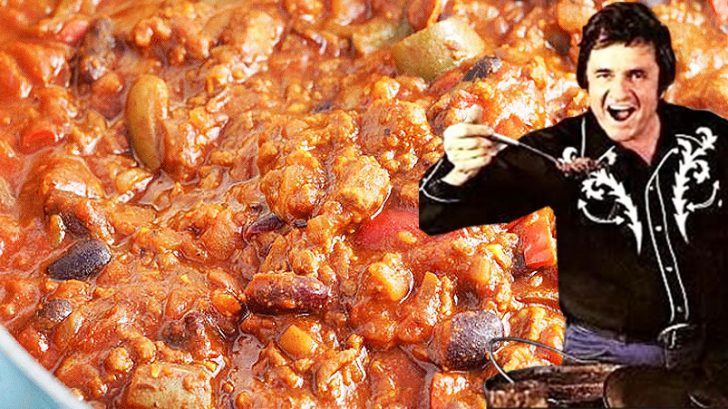 Nothing is better than a nice bowl of chili on a breezy summer night. One of country music’s most iconic stars, Johnny Cash, was known for making a mean bowl of chili– and I got ahold of 2 of his recipes.

The first one was shared by his son, John Carter Cash. It has a ton of ingredients and packs even more flavor. The second one is a more basic everyday recipe, but it’s just as delicious.

Regardless of if you choose the first written recipe or the video at the end of this post for his more classic chili, you’re going to love them both. Here’s what you’ll need to get the first one started.

I know, a lot of ingredients. This makes a lot of chili, so be sure to have someone help you serve it or you might end up like this.

Anyway, here’s how to make it:

Chop the steak into relatively large pieces, but not too big. Chop the onion finely. Separate the garlic cloves and peel and chop them.

In a large pot, heat the oil over medium-high heat. Brown the steak in the oil in batches, draining off some of the fat if necessary. Remove from the heat and set aside.

In a separate skillet brown the ground meat over medium-high heat. Drain off the fat and set aside.

With the oil remaining in the pot, brown half the onions and garlic over medium heat until they are caramelized. Now add the well-drained ground beef and steak. Stir and heat it all up.

Add the cans of tomatoes, the bell peppers, hot peppers, if using, and the remainder of the onions and garlic. Heat to a brisk simmer, stirring often.

Once it tastes to your liking, drain the cans of beans and add to the mixture. Now taste again, as you may want to add some more spices because the beans mellow their flavor.

Once the chili tastes right, pour in the bottle of beer. Stir well. Cover and simmer for at least 30 minutes, stirring occasionally. Add sugar to taste, but be careful not to use too much.

Simmer, covered, for at least another 30 minutes, making sure to stir so it does not burn. Now grab that handful of cornmeal, uncover the chili, and throw the cornmeal at the pot. Stir it in.

NOTE: If self-rising cornmeal is unavailable, you can make it yourself. Just combine 1 cup of cornmeal, 1/3 cup all-purpose flour, 1 1/2 teaspoons of baking powder, and 1/2 teaspoon of salt.

That’s it! If you want a more basic chili recipe, check out Johnny’s “Old Iron Pot” recipe in the video below. It’s just as delicious!