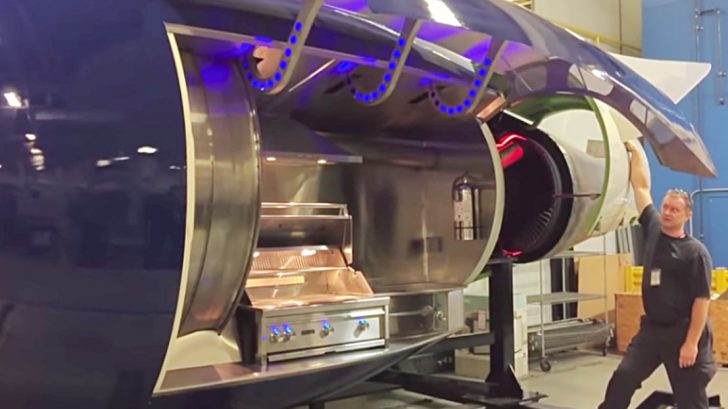 Delta Airlines TechOps team in Atlanta may be known as elite engineers, but they’ve used their skills to create something truly remarkable that you definitely have never seen before.

What is it, you ask? Picture this: a massive jet engine transformed into a beautiful BBQ grill.

Back in 2016, this BBQ grill was created by Delta’s TechOps team by making use of scrap parts.  These parts, from a Pratt & Whitney PW2000 jet engine of a Boeing 757, are what created the amazing final product.

Even though this grill was created from enormous parts, the engineers found a way to develop every part of the grill in so it’s easily accessible.

When the light-up door of the grill opens, it provides you with a workstation and the grill. The work space is enormous and absolutely stunning, making it a piece of art, an engineering feat, and the ultimate barbecuing space all in one.

The engineering team has another custom grill to its name that was developed last year. Much like its sister grill, this grill is quite the accomplishment.

It was built from a scaled down plane grill that had a wingspan of over 20 feet across. In addition, there’s a fuselage grilling chamber that is 38 feet long and about 15 feet high at the tip of the plane’s tail.

If that wasn’t impressive enough, this plane grill can churn out 500 burgers an hour.

You read that right– 500 burgers per hour. So not only does this grill look incredible, it produces a spectacular amount of food… perfect for a massive barbecue!

Or, you know, impressing literally anyone who sees it. According to Don Mitacek, the Senior Vice President of Technical Operations at Delta, the craftsmanship of the grill allows people to see what the TechOps team is truly capable of.

If they can do this with a plane engine and an old plane, they probably are keeping the newer planes in tip top shape!

Check out one of their grills in action in the video below. I still can’t believe these things are real!