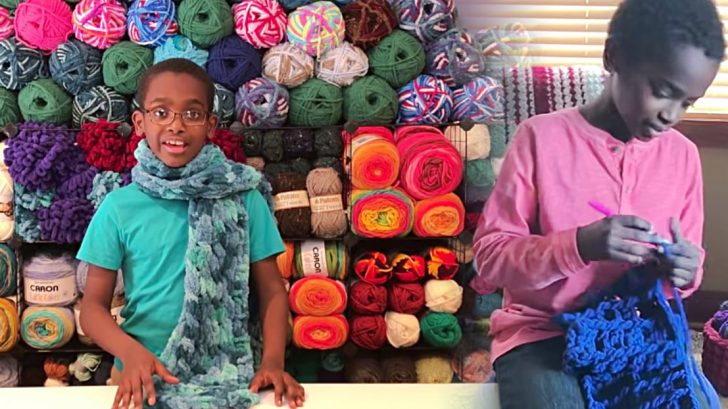 When Jonah Larson was a baby, he was adopted from an orphanage in Ethiopia. He grew up to be an adorable young boy with an unusual passion– crochet!

At five years old, Jonah became hooked on crochet, and in no time at all, he became incredibly talented. So much so, in fact, that the now 11-year-old has his own business selling his projects.

He first started crochet when he randomly received a bag of the supplies. In no time at all, he was on YouTube, teaching himself the techniques and picking them up on his own.

After 6 years of crocheting, he is now called a “crocheting prodigy,” and he’s known for tackling complex and intricate projects many adult experts even struggle with. He’s even made TV appearances for it!

My new friend @sheinelle_o from The Today Show! Posted @withrepost • @sheinelle_o There are some days when our guests just LIGHT UP the studio … like 11 year old Jonah. I couldn’t love him more. -Born in Ethiopia, and later adopted after being abandoned as a baby and found wrapped in a banana leaf… he has defied so many odds, and has found comfort in crochet …. and he is AMAZING! Take a look at his IG @jonahhands or YouTube channel . Now he regularly donates goods and money back to his Ethiopian village …. and he sports the cutest jacket with his “sayings” on patches ….. I just think he’s awesome and I can’t wait to see what his future holds❤️ #3rdhourtoday

He shares all of his projects online, both on his YouTube channel and Instagram account, both appropriately called “Jonah’s Hands.” He’s also writing a book, so watch out for that.

His projects vary from things as complex as amigurumi octopi to things as simple as blankets and scarves. Who does he have to thank for this incredible hobby? None other than his mother.

Jonah’s mother Jennifer first gave him his crochet tools, having never practiced the craft herself. She helps him with his business as well, running his Instagram and joining crochet Facebook groups.

The best part of Jonah’s immense talent for his passion? He uses it to give back to where he came from. He uses a portion of his business profits to buy more supplies, but the rest is used for donations to the orphanage he came from.

He’s even taken things a step further recently by launching a GoFundMe, in partnership with a non-profit called Roots Ethiopia. The charity focuses on supporting the country’s children and their families.

Jonah hopes to help people in his home country achieve their own dreams in the future. Just goes to show how much your favorite craft can help the world!