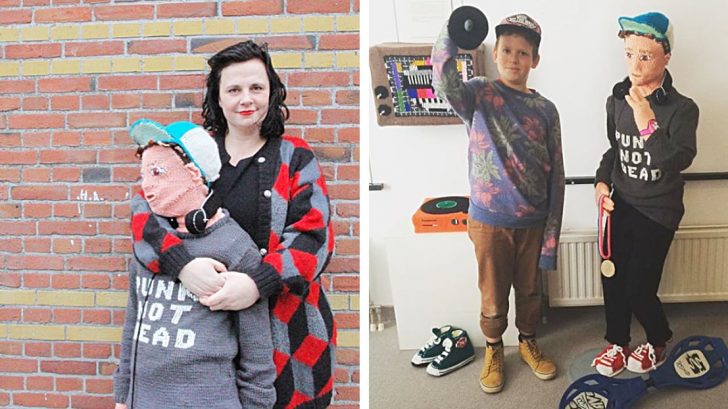 If you have children, then you’ve been there. They get to a certain age, and certain things just don’t happen anymore. They mature, and as beautiful as that is, it also means a little less attention for you.

Kids become independent and don’t need their parents for as much anymore. Most parents just have a good cry, but Amsterdam mother Marieke Voorsluijs took matters into her own hands.

Voorsluijs is a textile designer by profession. Her teenage son didn’t want to cuddle anymore– so she knit a new version of him!

This hilarious move comes as no surprise: Voorsluijs has a knack for knitting, and she’s been known to create a ton of beautiful creations with her needles.

She even has a knitwear brand called Club Geluk, and it’s known for some strange or out-of-the box things. Knitting her son was just the next step in adding to her repertoire.

So she made the alternate version of her son, and waited for the reactions to pour in, and they were definitely varied.

She went into further detail in her blog post.

“To set the bar a little higher regarding my knitting skills I thought of knitting my son. He liked it and we worked together on it.

“The reactions during the process were so diverse from creepy to beautiful that we decided to make some photos in real life to place the weirdness in context. It was a fun art family art project!

“My knitted son consists of: a knitted head with a cap, hands with nails and watch, knitted trousers, a knitted sweater with an obstinate slogan, knitters sneakers, and knitted iPod. The knitted son has characteristics of both my sons.”

The project took only 2 months to complete, which is incredibly impressive in my eyes. Would you go as far as to knit your own cuddle buddy?

Check out Marieke’s Instagram to see more of her impressive projects… I can’t choose a favorite!