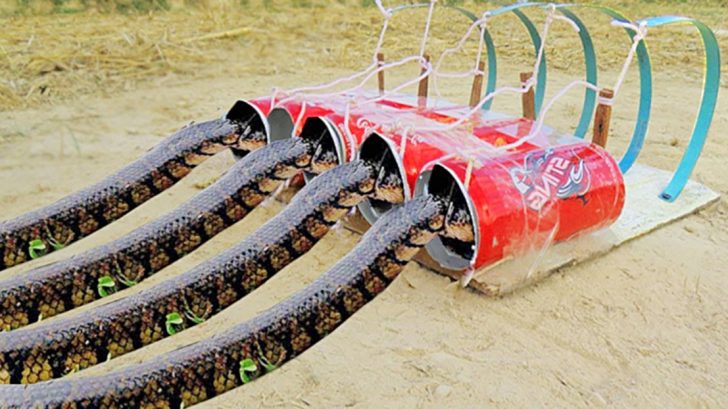 If you live in a climate that lets snakes thrive, then you’ve probably had to deal with a snake or two near your home. That’s where snake traps come in handy.

Believe it or not, you can actually DIY your own snake trap from the most unlikely material: soda cans. Not only is it super effective, but it’s easy to build!

Cut the tops and bottoms off of your soda cans. Glue, tape, or nail them down on to a sturdy piece of wood. Simple Willderness uses clear duct tape and nails for extra security.

From here, he uses thin metal strips with holes on both ends and attaches them parallel to the soda cans on the opposite side of the wood. Next comes attaching them.

He screws these in place, attaching them to smaller pieces of wood with thin rope. These pieces of wood rest on the soda cans. Then, he loops the rope and places them on the opposite side of the can.

These loops he’s just created will set off by the wood sticks and metal bars, tightening the rope and trapping the snake. He builds a little fence around the edges to keep the snakes in place.

Now, it’s time to lure them. Using some small fish as bait, he places them inside the soda cans, being sure not to trigger the trap by touching the small pieces of wood.

The snake trap is now ready to go, and as you can see in the video below, he captured quite a few snakes. You can set the snakes free by cutting the rope, or get the professionals to dispose of them.

Pretty cool, huh? You’re now snake free! Check out the video below for more, and get to trappin’.