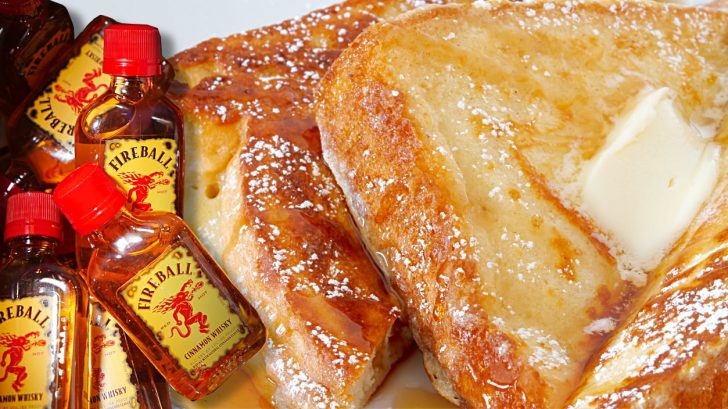 French toast has always been one of my favorite breakfasts. There’s nothing like waking up in the morning to a stack of french toast, some hash browns, and a tall glass of orange juice.

What’s even better is French toast after a night out. My alcohol of choice is Fireball whisky, which is packed with cinnamon flavor, just like French toast!

So why not combine the two? It’s just subtle enough to remind you of the night before, and it packs a punch that a lot of breakfasts lack. It is the most important meal of the day, after all!

Combine eggs, milk, Fireball, half-and-half, sugar, cinnamon, and salt in a large bowl and whisk well. In the mean time, cut your bread to 3/4″ slices.

Soak the bread on both sides, fry them up on a pan with some butter, and serve. Liquor.com recommends you serve it with more butter, and either maple syrup or apple butter.

Check out tips for soaking and cooking the bread in Liquor.com‘s video below, as well as their blog post, which you can visit by clicking here.