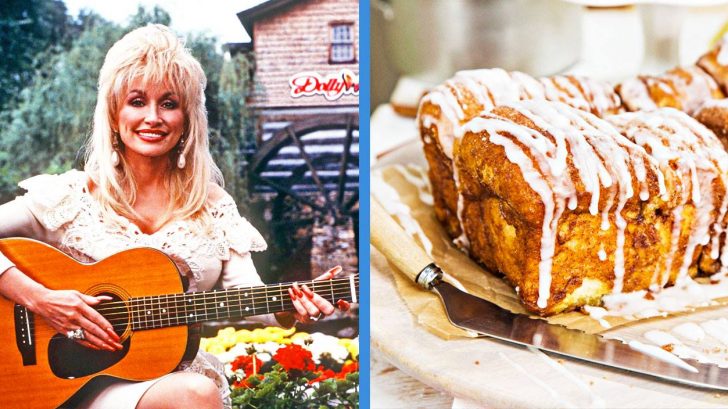 If you’re a Dolly Parton fan, then you’ve definitely heard of her theme park, Dollywood. Besides roller coasters and Dolly memorabilia, there’s one other thing the park is known for: the food.

Dollywood’s food has been named the best theme park food in the world with a Golden Ticket Award. Perhaps the most famous Dollywood recipe is the cinnamon bread. This buttery pull-apart bread is a crowd favorite, selling about 350 loaves an hour.

Don’t think that just because they sell so many loaves of bread that they don’t make everything fresh. In fact, the flour for the bread is ground onsite at their grist mill!

Dolly released a cookbook with her secret to making this amazing bread, and not only is it absolutely delicious, it’s super easy.

Combine the sugar and cinnamon in a shallow dish and set aside.

Cut the dough lengthwise into two pieces. Make 4 crosswise slits in each piece, taking care not to cut all the way through. Brush the loaves all over with butter, making sure to cover the creases. Roll each loaf in the cinnamon mixture, packing the cinnamon into the creases with your hands.

Place the loaves in the prepared pans and set aside in a warm place to rise for 30 minutes. While the bread is rising, preheat the oven to 300 °F.

Bake the bread, turning the pans around once, for 35 minutes, or until the top is golden and a tap on the bottom of the pan yields a hollow sound.

Meanwhile, make the glaze. In a small bowl, vigorously stir together the powdered sugar and water (or lemon juice) until the mixture is smooth and free of lumps. Turn the breads out onto a rack while they’re still warm and drizzle with the glaze.

Since I don’t live anywhere near Dollywood, this recipe makes me insanely happy. It’s my new go-to dessert, and I’m sure it’ll be yours too once you try it!