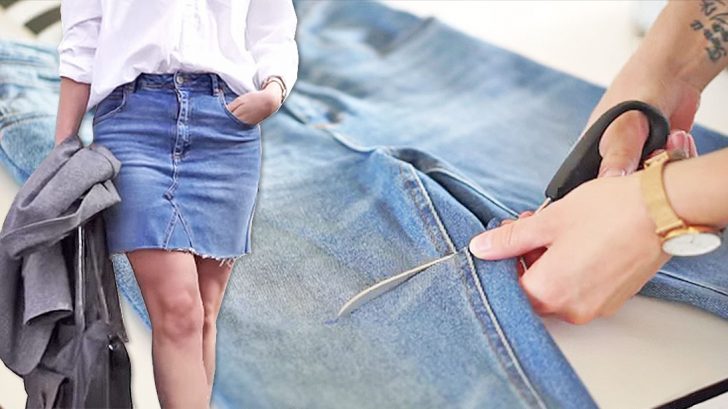 Instead of throwing out your old jeans, why not turn them into a different item for your wardrobe?

As long as the jeans still fit you in the waist and hips, you can transform them into a skirt. Denim jean skirts never go out of style. They’ve been in style as long as I can remember.

You can embellish it with lace or somer floral appliques, or just keep it simple as Use Less did with a frayed hem.

First, cut the skirt to the length you’d like. If you’d like to sew a hem, leave a couple of inches to fold over and a seam allowance.

Then, cut open the crotch area. Stay as close to the seams as possible when you do this.

Cut open the crotch a bit more, a couple of centimeters upward toward the zipper. Cut some fabric from one of the legs you just cut off to fill in the gap.

Cut any excess fabric from the seams to make sewing your new hems easier.

Fold over the original hem on the crotch and sew it in place with thread similar in color to the thread used to originally sew the jeans.

Use the extra fabric from the legs to sew in between the openings, then cut away the excess fabric.

Hem it if you’d like to, then you’re done!

After I made mine, I realized I could wear it with practically anything. I ended up making a few more after this one was done.

During the summer, it’s super cute with a graphic t-shirt and some tennis shoes. For the colder months, some tights, a sweater and boots look amazing.

Watch how Use Less transforms her old jeans into a cute denim skirt in her step by step tutorial below.

How are you going to make your skirt your own?