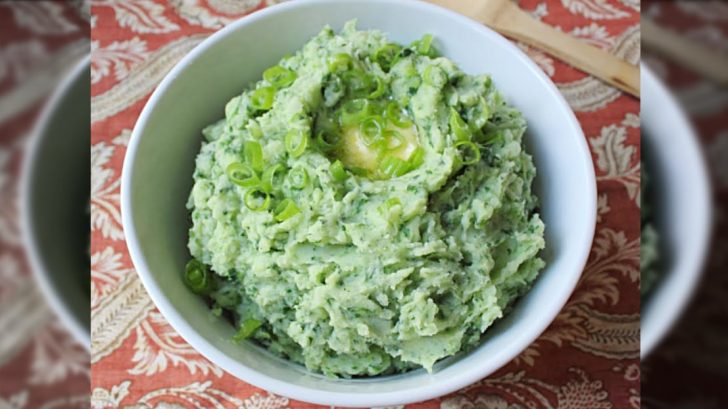 Mashed potatoes: they’re both an American staple and an Irish staple. Creamy, buttery, full of flavor, and something that I definitely eat way too much of.

They’re delicious as a side dish with nearly everything, and I’ve never met a single soul who doesn’t like them. In fact, in my humble opinion, you should never trust anyone who doesn’t like mashed potatoes.

Anyway, enough of me ranting about how delicious mashed potatoes are. You get the picture, and now you’re probably craving some just as much as I am!

Instead of going the traditional route, I decided to kick up classic mashed potatoes a notch. Since it’s almost St. Patrick’s day, I decided to try a recipe called Colcannon.

It’s an Irish recipe that creates an extremely flavorful mashed potato, and it’s green! Wanna learn how to make them yourself? Chef John from Food Wishes has the recipe, so let’s get started.

You will need the following.

For the green mix to flavor the potatoes:

How To Make It

To make these mashed potatoes, start by slightly cooking your kale and leeks in salted boiling water as John directs. Blend together the kale, leek, green onions, and butter until it becomes a paste.

In the meantime, boil your potatoes in salted water. drain them very well, then mash with some butter, followed by the green mixture.

Thin this out with your cream or milk, then add any salt and pepper you need. Spoon it into a bowl and top it with butter and green onions. Now you’re done!