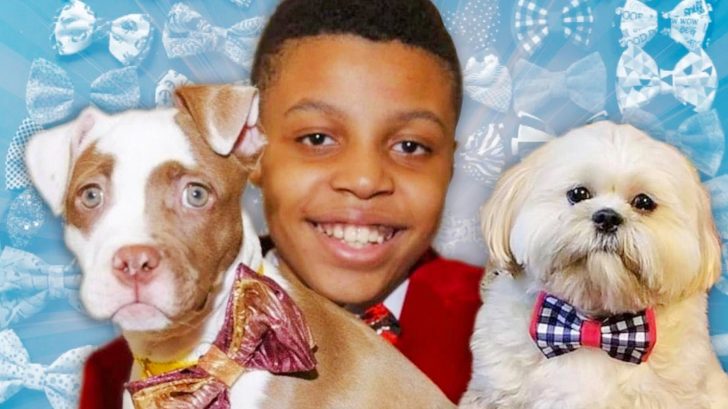 At the age of 2, Darius was diagnosed with developmental delays that affected his speech, comprehension, and fine motor skills. His older sister developed a talent for making hair bows, and decided to ask Darius to help cut the fabric so he could develop those skills.

Eventually, Darius gained enough skill that he was able to create his own bows, and started making bow ties for fun. Eventually, that love for bow ties turned into a full-blown charity organization.

Darius always had a love for dogs, so he decided to send some of his cute little bow ties to the ASPCA. The result was amazing, allowing more animals to get adopted with the personality the bow ties gave them.

Seriously, one look at those dogs, and I’m just like:

He calls the endeavor “Beaux & Paws,”  which not only helped him grow, but also has benefited animals in need. After Hurricanes Harvey and Irma hit, he created the company, and helped place the displaced animals in the homes they deserved.

Darius has received support from celebs like Kim Kardashian and President Barack Obama, and his business has grown tremendously.

People all over the world have donated fabric to Darius, and there’s no sign of this little entrepreneur’s train of giving stopping any time soon.

Check out an interview with Darius in the video below. There’s so much he’s done for stray animals in such a short time, and there’s no doubt he’ll be doing a lot more!