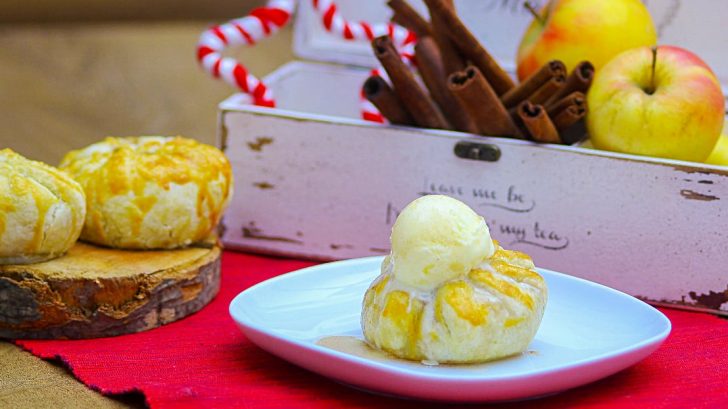 I could eat apple pie every day. It’s delicious with a buttery, flakey crust, crisp, syrupy apples, and a hint of spice. What’s not to love about that?

I adore apple pie so much that I knew this baked apple pie dumpling recipe was for me. I just had to make some, and I was not disappointed. They’re so beyond good!

Do you wanna try apple pie in a tiny, innovative package? Then let’s get started on this recipe.

You’ll need these things to make these delicious dumplings:

And for the caramel:

Preheat your oven to 400 degrees F. Start by peeling your apples, removing the stems, then halving them. Use a melon baller to scoop out the middle of the apple and the seeds, creating a cup.

Mix the apple bits you removed (not including the seeds) with butter, sugar, cornstarch, and cinnamon. Roll out your puff pastry and cut them into circles using a bowl.

Full your apples with the apple cinnamon mixture, then place them in the middle of the puff pastry. Use the egg white to brush around the edges of the pastry dough, then seal them up into dumplings.

Poke holes to ventilate the dumplings. Brush the outsides with more egg, then bake them in a lined pan for 18-22 minutes.

In the meantime, combine the sugar, cinnamon, water, and apple cider in a sauce pan and boil. Add in your lemon juice and butter. Once the butter melts, take it off the heat.

Serve your dumplings with a scoop of ice cream and the caramel sauce on top. Now you have a delicious pocket-sized dessert everyone’s gonna love.