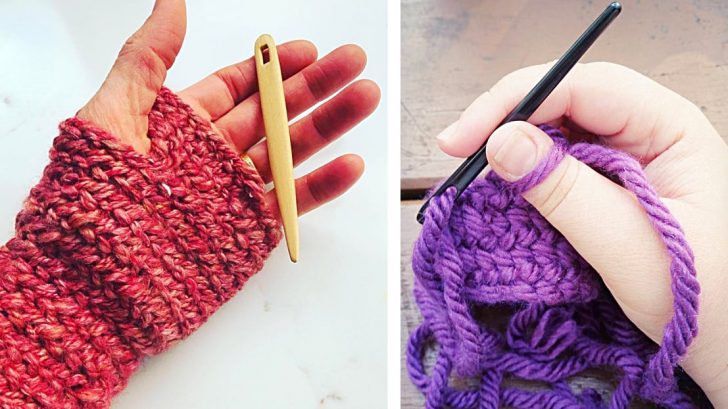 Nålebinding is literally “binding with a needle” or “needle-binding” in Danish. Alternate spellings include naalbinding, nålbinding, nålbindning or naalebinding. In English, it’s known as “knotless netting,” “knotless knitting,” or “single needle knitting.”

The oldest known example of Nålbinding dates from c. 6500 BC, and was found in Nehal Hemar cave, Israel. Another from the Ertebølle period c. 4200 BC was found in a Mesolithic fishing village in Denmark.

Though there’s a clear Viking influence in these textiles, they’ve also been found in places like Egypt, but changes in the textile industry over the years made this technique die out in the 1950s.

Archaeologists, craftsman, and historians have renewed interest in this classic technique over the years, and now it’s considered a specialization.

So how does it differ from knitting and crochet? It involves passing the full length of the working thread through each loop, unlike crochet where it’s is formed only of loops, never involving the free end.

Unlike knitting, lengths must be pieced together during the process. Knitting involves a continuous strand of yarn that can easily be pulled out.

Nålbinding uses short lengths of yarn and a single-eyed needle. The needle is often broad, flat, and made of wood. As you can see in the tutorials above, the chaining techniques differ as well.

The last step of the tutorial by Erika Strandjord is below. As you can see, it’s actually not as difficult as it looks! Give it a try yourself!