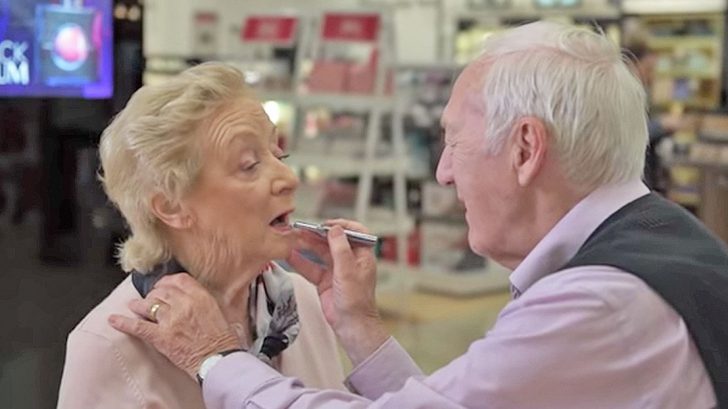 Every once in a while, you stumble upon one of those couples that reminds you that love is real.

Des and Mona Manahan from Ireland are one of those couples. They’ve been married for over 56 years and are still going strong.

When Mona started losing her sight as she got older, 84-year-old Des stepped in to make sure she continued to feel beautiful every day: he took classes and learned to do her makeup for her.

It all started with a birthday party. Mona decided she wanted to get all done up at the mall, so her husband took her to get it done. That’s when they met makeup artist Rosie O’Driscoll.

“[Des] was telling me the story that Mona… her sight was very very bad, and that she wasn’t able to hold things properly. She had a lot of shaking in her hands,” O’Driscoll said. “Des took the brushes from my hand and wanted to have a try. If you just see the way he holds the brushes, you see he’s a natural.”

So much of a natural that celebrity makeup artists took notice.

A few months ago I heard the story of Des & Mona, a couple from Ireland. Mona began losing her eyesight and her husband Des began taking makeup lessons at Benefit Ireland with @rosieodriscoll74 so he could learn to apply her makeup for her ♥️♥️ I called my manager and told her i wanted to invite Des, Mona and Rosie to #TheMasterClass and we had to make it happen. Big thanks to @benefit_ire for helping me to make this possible. My heart felt so full seeing them there in front of me. My highlight of #TheMasterClass London and of the year ♥️ ♥️♥️♥️ #TrueLove #benefitireland

Mario Dedivanovic, Kim Kardashian-West’s makeup artist, heard about Des & Mona’s story and invited them to his master class in London.

“It’s an effort for me to even realize how big it was,” Mona said. “Makeup, and Mario, and the Kardashians and all that had absolutely nothing in our lives up until now.”

With all of the attention they’ve been getting about their story, Des & Mona have one makeup tip they’ve been sharing, and incidentally it’s something they’ve both agreed upon from the beginning.

“Less is more,” Des said. “There’s no way I want my lovely Mona slapped up with stuff.”

“He thinks I’m lovely as I am,” Mona added with a smile.

Check out Des & Mona’s full story below and get your tissues ready. It’s too cute!