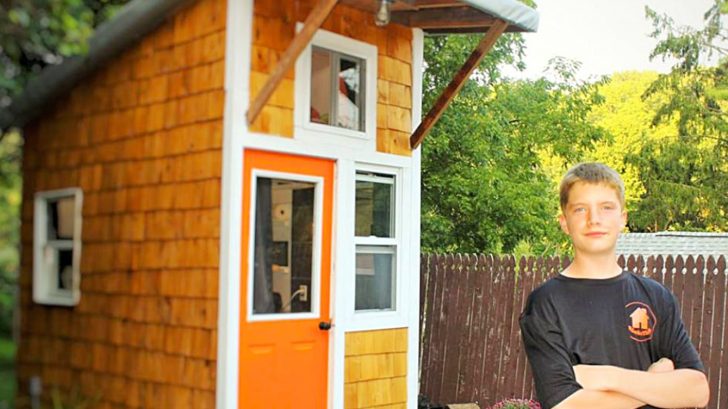 At just 12 years old, Luke Thill wanted a tiny house, and by 13, he had one. Not only was he in possession of a tiny house by that young of an age, but he built it himself.

Thill, of Dubuque, Iowa, wasn’t your regular kids. Instead of running around outside to pass the time, he got bored and wanted something more. That’s when the build happened.

Owning a home, much less building your own home, takes a lot of thought and a ton of money. Tiny homes are a bit more forgiving, but prices can still add up to tens of thousands of dollars.

Not only did young Luke build his own tiny home, but he didn’t have to deal with any of those issues. It only cost $1,500 to build, and he made most of the money himself!

The rest of the funds for this project came from his parents and a GoFundMe account, and before long, Luke started building.

He built the house with help from his dad and housed it in his own backyard. Once he was done, the story skyrocketed and was reported all over the country.

The project became so popular that Luke decided to upload a YouTube video about it, giving a tour and explaining the entire process step by step.

To date, this video has more than 11 million views from around the world, and his channel has over 61,000 subscribers.

I don’t know about you, but I feel like Luke has truly made an impactful dent in the DIY World. Not only did he complete a difficult project, but he did it at 13.

You can watch the video tour below. I can’t wait to see what Luke builds next!